Published: May 27, 2020 5:00 am
Tags: Politics
The entrance of a convenience store in downtown Austin last week. Eddie Gaspar/The Texas Tribune

What you need to know Wednesday:

The U.S. Department of Agriculture’s award of a $39 million food distribution contract to a San Antonio events company has drawn criticism from two members of Congress from Texas, the San Antonio Express-News reports.

Those calls come after the Express-News reported that the event planner who owns the company “boasted about clients who say they’ve never worked with him, cited unearned professional credentials and touted business affiliations that can’t be verified.” — Brandon Formby 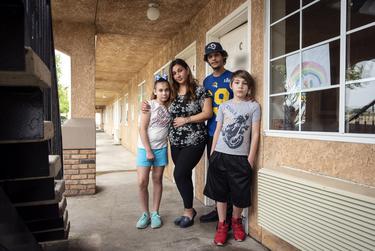 From left: Paetun Beavers, 11; her mother, Tie Hernandez; her stepdad, Andre Cameron; and her brother, Kingstun Beavers, 9, have been living at Budget Suites of America in Fort Worth for two months. Ben Torres for The Texas Tribune

Roughly three weeks after state and federal teams descended on the Panhandle to address the explosion of new coronavirus cases tied to local meatpacking plants, Gov. Greg Abbott will give an update from the region at 2 p.m. Wednesday. The state recorded more than 700 new cases of coronavirus on May 16 after targeted testing at meatpacking plants in the area. The state's "surge response teams," which include health officials, emergency response workers and the National Guard, aimed to provide more personal protective equipment and testing supplies, and they worked with local officials to put in place additional standards to contain the outbreak. You can watch Abbott's update here.

Texas officials on Wednesday are expected to release the latest number of Texans who have tested positive for the new coronavirus. As of Tuesday, a least 56,560 have contracted the virus, and at least 1,536 have died. See maps of the latest case numbers for each county and case rates per 1,000 residents. — Carla Astudillo

Disclosure: The Texas secretary of state has been a financial supporter of The Texas Tribune, a nonprofit, nonpartisan news organization that is funded in part by donations from members, foundations and corporate sponsors. Financial supporters play no role in the Tribune's journalism. Find a complete list of them here.