Many Texas prisoners have been approved for parole but can’t walk free yet. Advocates say coronavirus should change that

The Texas parole board had decided: Stephen Shane Smith was going to get out of prison.

The 40-year-old was less than a year into a five-year sentence for a drug conviction when he was approved for early release in January. The only thing standing between him and his freedom was completing an in-prison life skills program.

But as the new coronavirus sweeps through the Texas prison system and many units are restricting inmates to their cells to limit the spread, it’s unclear if and how this education program — a typical requirement for Texas prisoners granted parole — is proceeding. His wife, terrified for her husband, who has a bad liver, is pleading for his release.

“This is basically going to end up a death sentence,” Stacey Smith said, insisting her husband could still complete any programming after his release. “Whatever kind of program, whether we did that remotely right now … I would definitely assist him to get to any kind of program.” 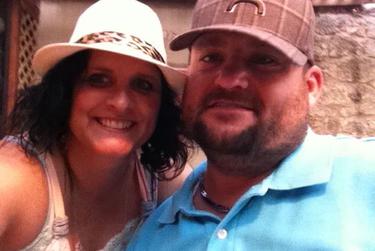 Her husband’s prison, Huntsville’s Goree Unit, is on lockdown — meaning activities are halted — because two inmates there have tested positive for the coronavirus. Stacey Smith said the pre-release program, which is supposed to include 180 hours of classroom instruction, has now become her husband filling out paperwork in his dorm.

“He feels like he’s kind of at a standstill,” she said.

More than 190 Texas prisoners have tested positive for the virus, and because most prison units are in rural areas, there's a heightened fear that an outbreak behind bars could overwhelm already-struggling local hospitals. Jails and prisons are known incubators for disease, and there has been a nationwide push during the pandemic to get more people out from behind bars, including in the federal prison system.

One way Texas advocates are asking for relief is for the Texas Board of Pardons and Paroles to immediately release people who have already been granted parole but still need to complete education or treatment programs. Especially for prisoners with nonviolent or drug offenses where in-prison classes may be on hold or consist of filling out worksheets in cells, they argue programs can continue online or in the community outside of the prison fence line.

“There’s a lot of ways to be creative here in a time of emergency,” said Doug Smith, a senior policy analyst for the Texas Criminal Justice Coalition. “If you can reduce the population, that gives each unit the ability to do some level of social distancing.”

But the idea of increased release has met steady resistance from some law enforcement and Texas officials who fear letting more people out of prison and jail could lead to more crime during what is already a disastrous time for the state. A spokesperson for the Texas parole board said that body is still working and holding virtual parole hearings, but there has been no change to decision-making because of the pandemic. And Gov. Greg Abbott issued an order last month that, while focusing largely on jail inmates who have not yet been convicted of crimes, sent a strong message against increased release from all lockups.

“We want to prevent the spread of #COVID19 among prison staff & inmates. But, releasing dangerous criminals in the streets is not the solution,” the governor said in a tweet after the order.

When the parole board decides to let someone out of prison early on parole, it can do so in a variety of ways. About 40% of about 26,500 prisoners granted parole in 2018 were let out without any required in-prison programming, according to a board report. The other 60%, however, were approved pending completion of treatment or classes, which last between three and 18 months after the inmate can be enrolled.

Some of the programs are specific to the person’s conviction, like substance abuse and sex offender treatment programs. But a common class required before release is the more generic life-skills program Stephen Shane Smith is in, called CHANGES — an acronym for Changing Habits and Achieving New Goals To Empower Success. According to the prison school district, it is a three-month program on “personal development, healthy relationships, living responsibly, drug education, psychological development, health education, and resources for release into the ‘free world.’”

But with classroom structure gone from much of the prison system for the time being, the programs have shifted. Multiple people with family members in the prison system told The Texas Tribune that their loved ones were now being handed packets or given writing assignments in lieu of face-to-face education or group activities. Allen Harrison, whose son is also at Goree and was approved for parole pending completion of a sex offender treatment program, said his biggest fear is that the pandemic will mean a delay to required treatment and keep his son in prison even longer.

Texas prison and parole officials, while not moving toward faster release, also hope delays aren’t necessary. Jeremy Desel, a Texas Department of Criminal Justice spokesperson, said ideally, unit-wide lockdowns at prison facilities with recent cases of coronavirus — 22 as of Monday — won’t affect parole releases. The lockdowns mean no new staff members can come into the prison, but counselors for programs should already be at the necessary prisons to continue course work, he said. But he acknowledged it’s a work in progress and an ever-evolving situation.

“There aren’t going to be any classes, any group classes, so I suppose there’s a possibility it could have an impact,” Desel said. “... It’s not in anybody’s best interest to slow down release, so we’re doing everything to figure that out.”

For some treatment programs, like the nine-month sex offender treatment program Harrison’s son is in, Doug Smith said he understands why early release may not be feasible. He said some treatment requires a group process, and while inmates may be limited in what they can do while on lockdown, more interaction and focused work could start up again. But more than 4,000 prisoners in 2018 were approved for parole release after three-month, less intensive programs, like CHANGES, according to the parole board report. Doug Smith and a group of criminal justice reform advocates are calling for the parole board to change the statuses of prisoners in those programs to immediate release.

“It doesn’t make sense to keep someone where there could be high levels of contagion for that type of class,” he said. “If the programming could reasonably be completed in the community, then make that a parole condition and release the person now. ”

When asked about the push for faster parole releases to shrink the prison population during the pandemic, state Rep. James White, chairman of the Texas House Corrections Committee, said it would go against what the governor has indicated he wants. But White emphasized there had not been a chilling effect on parole releases either.

“I hear people saying, ‘Well, they’re just sitting around working out of the workbook, they’re not even engaging with the counselor,’” the Hillister Republican said. “Well here’s my thought about that — that’s the program. You just do the program.”

White said the parole board has more tools it could use beyond typical parole release, like for those with dire medical needs. But people shouldn’t be released en masse because of the virus, he said, giving the example of releasing all parole-eligible prisoners convicted of driving while intoxicated.

“I’m very, very protective of … our state constitution, which says that any change in someone that’s a convicted felon, any change in their status, you have to get the victims involved,” he said.

At the Havins Unit, a pre-release facility in Brownwood, Marie Bumgarner’s fiance is in a substance abuse treatment plan before he can be released on his approved parole, she said. Brian Hays, 47, was approved in March for parole after he completes the program. He was sentenced for evading arrest in 2012 after previous theft and burglary charges.

Bumgarner said because of the coronavirus, the treatment program now consists of writing two essays every day in his dorm, on things like hepatitis and other drug-related diseases. She doesn’t know why Hays was put into the pre-release treatment program, but she said he is more than willing to complete it — she just wants it to be outside of prison walls.