Pfizer testing third dose as booster shot, but medical expert says its too soon to consider

Master gardener gives advice on reviving your garden after the freeze

Here is how President Biden, first lady spent their jam-packed day in Houston

Grocery store workers are risking their health during the pandemic to keep stores open. They want better pay and protections.

Shoppers line up with carts outside an H-E-B prior to opening. The COVID-19 outbreak has caused H-E-B to shorten its store hours in order to restock its inventory and better serve customers. March 21, 2020. Eddie Gaspar/The Texas Tribune

Lately, Logan is doing his best to suppress his panic attacks while restocking the constantly dwindling shelves at his job at H-E-B.

While people across the state are being told to stay home and avoid gathering in large groups in an attempt to slow the spread of the new coronavirus, Logan regularly finds himself surrounded by hoards of anxious shoppers frantically stocking up on beans and toilet paper.

In an acknowledgment of the uncomfortable position his job presents, one well-meaning customer patted Logan’s shoulder and thanked him for showing up for work. It was a kind, but “unnerving” gesture, Logan said.

“I can't really say like, ‘Don't do that,’” said Logan, who asked that his last name not be used because he was not authorized to speak about his workplace. “Just gotta smile and run away.”

Grocery store workers across Texas and all over the country are suddenly finding themselves on the front lines of the COVID-19 pandemic, forced to interact with hundreds of people per day and working in one of the few businesses staying open as restaurants and lounges are shuttered.

Scared for their health, and lacking protective equipment reserved for medical professionals, grocery store workers across Texas are now demanding more safeguards and pay for showing up to what is increasingly becoming a high-risk work environment.

“It’s been like the day before Thanksgiving every single day,” Logan said.

Grocery stores were deemed essential businesses by the state and federal government, along with gas stations, day cares and energy and transportation companies. That means they are among the few establishments that should remain open during the COVID-19 pandemic even as other businesses are forced to close.

But at the same time, grocery store workers in Texas are not considered essential employees like health care professionals and first responders. That designation makes employees eligible for government benefits like priority childcare, better access to testing and protective wear including gloves, face screens and surgical masks.

A top ask from grocery store workers and the unions that represent them is to be recognized as essential workers. They also want hazard pay and increased sick leave. Unions are lobbying for this at the corporate, state and federal levels. 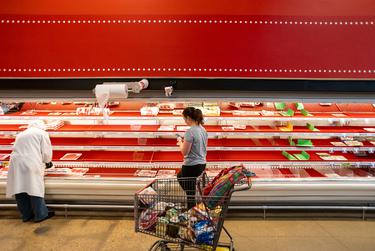 Empty shelves at an H-E-B in Austin on March 13, 2020. Jordan Vonderhaar for The Texas Tribune

Gloria, who works for a national grocery store chain in Dallas and asked that the Tribune not publish her full name for fear of retribution from her employer, said it’s impossible to truly practice social distancing while working in a grocery store, since cashiers, for example, can’t do their jobs 6 feet away from the customer.

“It almost feels like all these guidelines that are set to stop the spread of the disease don’t even apply to us,” she said.

Only the state and federal government can grant grocery store employees the essential workers classification. Hazard pay and sick leave policies are at the discretion of each grocery store’s corporate.

Representatives from H-E-B, Kroger, Trader Joe’s and Whole Foods did not return calls for this story.

The governor has yet to respond, said Anthony Elmo, political director for the union.

“This will ensure that our members can continue to serve their communities without having to choose between their health and their paycheck,” Burris wrote in the letter.

Some union members are also pushing for 1.5 times an employee’s standard wage as hazard pay. In Texas, Kroger is the only unionized grocery store.

Some grocery chains have already implemented temporary raises and bonuses. Chains including H-E-B, Kroger, Whole Foods, Target and Albertsons announced temporary $2 per hour pay raises. At Kroger full-timers will get a $300 bonus and part-time workers will get $150.

In a tweet Friday, H-E-B said the temporary pay bump is a way to thank its workers for their commitment to “help serve our customers & communities.”

Some grocery chains are also relaxing their sick leave policies to accommodate for the recommended two week quarantine time. But to qualify for sick leave at Kroger, the employer requires workers have symptoms that are verified by a doctor, according to a written release from the company.

“We also want to make it easier for associates to follow our guidance to stay home if they feel sick and to do our part to flatten the curve,” said Tim Massa, Kroger's senior vice president and chief people officer in a statement.

Stores have also implemented some safety precautions — closing every other register to space out cashiers, installing sneeze guards at registers and limiting how many customers can be in the store at once. Many stores have also limited hours and increased cleaning frequency.

In a perfect world, Logan said grocery workers would get hazard pay, help from corporate leaders to get tested, indefinite sick leave and vulnerable employees could wait the situation out at home with pay.

“A raise is nice, but at the same time we’re risking our lives so it seems like there could be more done,” Logan said.

Disclosure: H-E-B has been a financial supporter of The Texas Tribune, a nonprofit, nonpartisan news organization that is funded in part by donations from members, foundations and corporate sponsors. Financial supporters play no role in the Tribune’s journalism. Find a complete list of them here.