HFD trucks, other vehicles out of service due to staffing shortages caused by pandemic

Trust Index: Do hospitals get more money from Medicare for COVID-19 patients?

Coronavirus in Fort Bend County: How officials are trying to respond to worried residents

A map shows where the all the confirmed cases of Coronavirus across the world are at a call center for Coronavirus concerns in Rosenberg on March 10, 2020. Mark Felix for The Texas Tribune

ROSENBERG — The calls come in waves. It might have been a tweet that spurred them. Or a rumor. Or maybe it was just a suspicious sneeze from the next door neighbor.

But if the calls flowing into Fort Bend County’s health department phone banks are any indication, people are freaked out about the recent emergence of the new coronavirus in fast-growing Fort Bend County, where hospitals are preparing for a possible wave of patients, business owners are bracing for a downturn, and tranquility is in shorter supply than hand sanitizer.

“They see somebody coughing and they're like, ‘uhhh cough ... I think I’ve been exposed,’” said Randi Sykes, a county nurse who is helping to staff the call center in Rosenberg. “It's that worry and that concern because nobody wants to be sick.”

It’s not surprising that it’s happening here. Fort Bend County is a hot spot for the disease in Texas — it's where the first confirmed case of COVID-19 was identified, outside of the federal quarantine site in San Antonio. There were five more in rapid succession. And as of Tuesday evening there were just as many confirmed cases in Fort Bend as there were in neighboring Harris County, which has six times the population and is home to bustling Houston.

But all 12 of those cases, in both counties, are tied to people who traveled on the same Nile River cruise ship in Egypt. That hasn’t eased concerns among some residents, though, that community spread — when the source of infection is unknown — comes next.

So to deal with the increasing concern among local residents, officials set up the call center last week in a conference room in an old Walmart that now houses the Fort Bend County’s giant Rosenberg Annex.

Sykes said the chatter on social media and in news stories seems to be fueling the calls more than the events on the ground at this point.

“I would say that it might be feeding on itself,” she said.

On the far wall a big screen TV flashes the latest global coronavirus stats — courtesy of Johns Hopkins University — in real time. One bank of phones is dedicated to calls from professionals, schools and nonprofits. The other fields inquiries from the general public. 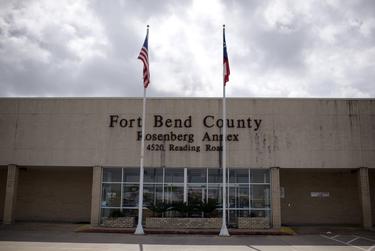 The Fort Bend County Rosenberg Annex center is also serving as a call center for coronavirus concerns in Rosenberg, on March 10, 2020. Mark Felix for The Texas Tribune

The most common questions they get by far: how can they avoid coming into contact with the feared germs?

“We're actually getting a lot of questions from the community just wondering what grocery store this person was going to, what school their kids are going to,” said health department spokeswoman Yaneth Calderon. “I think a lot of community members just want to be reassured by someone … they just want to call and just confirm yes, it's still okay to go to the grocery store it's still okay to just go on about your daily lives.”

The health department won’t provide the locations infected people frequented — not for COVID-19 nor the thousands of infectious disease investigations the department conducts annually. Authorities say they only identify locations in cases when there is a public health call-to-action, and at this point they say there are no risks associated with those locations.

In typical infectious disease investigations, epidemiologists first identify and quarantine (generally at home) close contacts of the infected person — such as a spouse, a child or a co-worker — and monitor them for symptoms. If those people test positive the circle widens to include less frequent contacts and the investigation grows from there. The cycle repeats for each infected person.

Health concerns aren’t the only worry among locals.

Kevin Stewart, a Fort Bend County construction contractor, said his new projects have declined significantly in the last week due to coronavirus concerns and a major slide in oil prices — fueled in part by lowered demand amid the outbreak.

“We still have projects moving forward. The fear is that if we get into a situation where the labor forces are stuck at home for 14 days at a time,” Stewart said. “We could be looking at months before you get a collective of professionals back together.”

Stewart got caught up in the moment himself during a recent trip to the grocery store —when it came to a certain personal hygiene item that supermarkets can’t seem to keep on the shelves.

“You start looking at this stuff going on and it's like, ‘Well if I don't go buy another bag of toilet paper, will there be any when I have to go to the restroom even? I think the panic's gotten ahead of everybody.”

Not that panic is necessarily bad for everyone’s bottom line.

Elisabeth Holzheauser, CEO of a broker agency that represents brands sold in all Texas grocery stores, says there’s been an uptick in orders up to about 30% since coronavirus fears spurred nervous shoppers to stock up.

Even in a down market, “everybody has to eat, so I've seen an increase in orders from all of the retailers,” she said. “All of the brands that we represent” — from Vital Farms eggs to Florida’s Natural juice — “are fully stocked and are being pretty flexible in trying to ship more product quicker to all of the different retailers and distribution centers that we work with in Texas.”

Jeffrey Wiley, president and CEO of the Fort Bend Economic Development Council says it's too early to measure what the local economic fallout will be and that "everyone’s hope is that this virus spread will diminish with warmer weather" and give researchers time to produce a vaccine.

Despite the palpable concern in this fast growing suburban county, Fort Bend authorities say they are as prepared as any jurisdiction can be as they await an expected increase in the number of cases.

Fort Bend Judge K.P. George said he’s serving one of the most diverse populations in the country — whose distinctly international profile means people are often traveling between Texas and destinations all over the world.

“We all wish coronavirus was not here but it is here so we are dealing with it,” George said. “So far, everything is looking under control and my message to our citizens is you have to be cautious, it is a serious matter but be cautious and treat it like any other flu situation and live your life carefully.”

At the nearby nonprofit OakBend Medical Center in Richmond, hospital staff are making sure the negative pressure isolation rooms are ready to go and in recent days they have been conducting drills, like sending a “mystery patient” into their emergency rooms complaining of classic COVID-19 symptoms to ensure their frontline workers properly diagnose patients.

The gift shop was also closed Tuesday morning by the volunteers who staff it because they would be especially vulnerable to the novel coronavirus — they’re old. 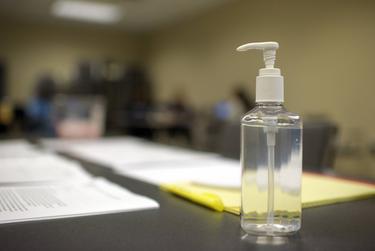 A bottle of hand sanitizer sits on a desk at a call center for coronavirus concerns in Rosenberg on March 10, 2020. Mark Felix for The Texas Tribune

"We don't want them to end up getting ill because they were here,” said hospital spokeswoman Linda Drummond. “Because they are very big supporters of the hospital."

Also on Tuesday, Mohammad Sadath, an infection control practitioner at OakBend, said he got updated guidance from state officials — to broaden their testing to include more people, beyond just those who had traveled to hotspot countries or had come into contact with infected people.

“There’s an expectation I think across public health as well that there will be an increase in cases. I think the million dollar question is how much,” Sadath said. “We don’t know how many more cases but this is definitely not the peak."