Survey: Some local businesses to require employees get vaccine

Over 50% of Texas’ senior citizens have gotten their coronavirus shots, Abbott says

Texas tried to take over Shepherd ISD. But a surprise, last-minute court order blocked those plans.

Published: March 10, 2020, 12:41 am
Tags:
Politics
Shepherd ISD board trustee Michael Courvelle outside of the district administration building on Monday. Michael Stravato for The Texas Tribune

SHEPHERD — It was a gloomy, wet Monday night in East Texas and Mike Courvelle was furious.

This was despite the fact that he appeared to have gotten good news: Texas was not going to wrest power from him or the other six elected school board members in tiny Shepherd Independent School District.

At least not yet.

State officials planned Monday night to swear in a board of managers, appointed by the Texas Education Agency, that would take control of hiring, budgeting and operations — a penalty for years of poor academic performance in two schools. The elected school board would lose all its power, until the state decided otherwise.

Board members and community members strolled into the district administration building Monday night planning to watch the transfer of power. Instead, they were notified that a court order had come down in Austin that afternoon temporarily stopping the state from taking any action.

The news was a surprise to nearly everyone in the building Monday night. State education officials waited for guidance from their lawyers. District employees waited for guidance from state officials. And two sets of school boards stood in the entryway to the board room wondering which would be allowed to gavel in: the one elected by residents or the one appointed by state officials. 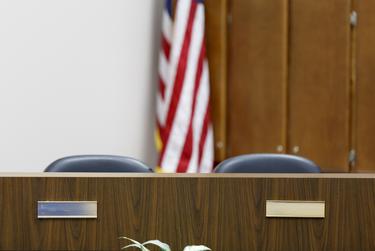 Elected school board members' nameplates had been removed in the Shepherd ISD school board meeting room before Monday's scheduled meeting. Michael Stravato for The Texas Tribune

Already, someone had removed the placards embossed with the name of each elected school board member, leaving the empty holders shining gold under fluorescent light.

Courvelle clutched a copy of the state court ruling in his hand, as he chastised the state for attempting a takeover in the first place and questioned its qualifications to turn around struggling schools.

"What they're doing is completely wrong all the way around," he said.

The announcement last year that the state would be taking over Shepherd ISD heightened tension in the town that has yet to subside. In a nearly empty diner, just before Monday's dinner rush, a group of employees got fidgety when asking their opinion, worried about losing business if they appeared to side with one faction or the other. A parent leaving McClain's Food Market shook her head, but offered that some were worried about the state getting rid of the football team.

One elementary school student shopping with his neighbor said he thought his school was "firing our teachers because our test scores aren't high enough," before shrugging and admitting that he wasn't sure what exactly was happening.

Back in November, Jeff Cottrill, the TEA's representative in Shepherd, had gripped the edges of a wooden podium and explained to an audience of more than 100 people that a state takeover was a necessary and prudent result of prolonged failing ratings in multiple schools. He answered hours of questions about what the loss of local control would mean for students and teachers in the small community.

Shepherd ISD sued the state over its plans, but after a Travis County state district court judge denied the district's request to temporarily stop the state takeover, the school board decided not to appeal that decision. Still, lawyers for the state appealed the suit to the Third Court of Appeals to try and prevent it from moving forward in a lower court.

But Shepherd ISD lawyers, though many people didn't know it, had decided to continue the case pro bono. And on Monday, they informed the appeals court of a "current emergency" since the state planned on installing a board of managers that night, an action that would be legally irreversible.

"The Court must act now," wrote David Campbell, who is also representing Houston ISD as it fights a pending state takeover.

The court agreed and temporarily stopped the state from installing its chosen board.

Monday night, Cottrill showed up to oversee the Shepherd ISD takeover finalized, but ended up leaving a trail of even more questions behind him. As he walked to his car, Shepherd district and city officials crowded around him, frustrated and confused: When would the state be back? Which superintendent was in charge? Who was paying for the district’s lawyer? 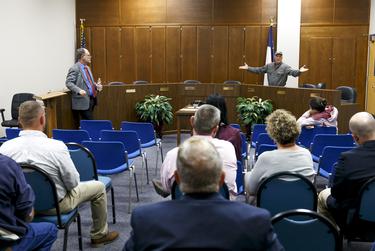 Shepherd ISD board trustee Michael Courvelle speaks at the district administration building after a meeting scheduled by the Texas Education Agency was canceled on Monday. Michael Stravato for The Texas Tribune

Once the state officials left, Hartley, Courvelle and elected school board president Susan Bailes held an informal meeting in the board room, now crowded with confused community members.

"All of us want what's best for kids," Bailes said. "When it's said and done, we want to know that Shepherd ISD's board of trustees left this position, if we end up leaving, the right way and that TEA doesn't get to be 'the bully' who came in and did what they wanted to do without the legal authority to do it."

Mayor Charles Minton, who sat in the back of the informal meeting, listening to Courvelle and Bailes, said he thinks there are probably more supporters of the state takeover than would publicly raise their hands.

Suburban sprawl fast spreading from Houston is threatening to soon reach 3,000-person Shepherd, its long highways lined with towering pine trees and red-flagged mailboxes, said Minton, a transplant from Central Texas. Some are worried about who the sprawl will bring to Shepherd's schools; Minton hopes the schools are good enough for families to choose them.

His son graduated from Shepherd High School and now attends University of North Texas in Denton. He knows firsthand it's possible to succeed in Shepherd ISD.

"We have to have passing schools. If it's with this board, fantastic," he said. "I got to take care of my kids."