Go Easy, self-care boutique, opening in the Heights this summer

Nine months ago, Cristina Tzintzún Ramirez was struggling to make a decision.

Progressive operatives — including former staffers for Beto O’Rourke — were begging her to run for U.S. Senate, but she had a young child, Santiago, and wasn’t sure if it was the right time.

So she made a phone call to a friend and confidant: Alec Baldwin.

“She’s one of a handful of people I’ve repeatedly told, ‘You’ve got to run. You have no choice,’” Baldwin told The Texas Tribune in a phone interview.

Like all 12 Democratic candidates vying for the chance to make a long-shot bid against U.S. Sen. John Cornyn, Tzintzún Ramirez, 38, is battling low name recognition in Texas. But supporters are hopeful that the campaign will get a boost — whether in money or excitement — from Baldwin, who is using his fame and resources to draw attention to the race.

In Baldwin, most recently known for his recurring portrayal of President Donald Trump on “Saturday Night Live,” she’s found a generous financial supporter and a trusted, while unlikely, informal campaign adviser.

Tzintzún Ramirez found Baldwin, a self-described “casual political watcher” who has few connections to Texas, surprisingly persuasive. Baldwin hasn’t been shy about his personal politics. He’s on the board of directors for People for the American Way Foundation, a progressive advocacy organization.

“I was making up my mind,” she said. “He really motivated me to believe this was the right thing to do.” She jokes that the movie star, who has deliberated his own political run, was living vicariously through her. “He told me that there would never be a right personal time and that he would do everything he could to help me.” Primary day is March 3; early voting begins Feb. 18.

Baldwin, 61, has been urging her to run for office — perhaps governor or U.S. Senate — since the two first met in 2013, she said. A New York Times article at the time spotlighted her work as then-executive director of the Workers Defense Project, an Austin-based group that fights for labor laws with the help of businesses, unions, churches and student activists. The piece impressed Baldwin, who called to say he wanted to meet her.

Tzintzún Ramirez was floored when the movie star first reached out. “Literally when I met him, my mom said, ‘Oh, señor Alec, he’s going to be someone very important in your life,” she raved.

The two hit it off, and he later invited her to be a guest on his short-lived MSNBC show. Since then, she’s visited him in New York and introduced him to her son.

That was seven years ago. Now Baldwin says he’s all in on her senate campaign.

He’s maxed out in donations and given her feedback on her launch speech, not to mention touting her candidacy to his large social media following. Tzintzún Ramirez said the two talk weekly during the campaign. Baldwin once said that he wanted to be connected with a staffer whom he could check in with regularly to find out how the race was going, she said.

In December, Baldwin encouraged his 1 million Twitter followers to donate to her campaign. He also headlined a fundraiser on her behalf in New York.

Here is the future of Texas!

Please donate to the US Senate campaign of my friend, Cristina Tzintzun.@cristinafortx pic.twitter.com/Zff7VXR1cF

“She’s exactly what we need in Washington right now,” Baldwin said. “She’s a woman of searing intelligence and commitment — and she’s tough.”

What drew Baldwin to Tzintzún Ramirez is the organizing work that’s become the main plank of her Senate campaign. The daughter of an immigrant mother, Tzintzún Ramirez was 24 when she co-founded Workers Defense Project in 2006.

In 2009, her group’s “Building Austin, Building Injustice” report highlighted the number of deaths and injuries in the construction industry, which led to a federal investigation and local reforms. She left the organization in 2015 and later formed Jolt, a progressive Latino youth group that focuses on civic engagement. Baldwin has financially supported both organizations. A spokesperson for Workers Defense said the organization doesn’t “disclose donor information or discuss donors in public,” but Tzintzún Ramirez estimates he’s given upwards of several tens of thousands of dollars to both organizations since meeting her.

Unlike most of her opponents, Tzintzún Ramirez’s background is that of a political rabble-rouser, not a politician.

“I think in this race that I may be underestimated, but you can ask any construction company or politician that has ever went up against me if they regret underestimating me and the people I represent,” Tzintzún Ramirez said.

First: Actor and podcast host Alec Baldwin has taken an interest in the campaign of Cristina Tzintzún Ramirez, a Democratic candidate for U.S. Senate. Last: Tzintzún Ramirez poses between Baldwin and his wife, Hilaria.

If elected, Tzintzún Ramirez said her No. 1 priority is “fixing the rules of democracy so that elected officials act in the best interest of the American people and not their large corporate donors.”

But there haven’t been many signs of progress in her campaign. According to the latest University of Texas/Texas Tribune Poll in November, none of the U.S. Senate Democratic candidates has been able to break out of the pack. Fifty-seven percent of respondents said they didn’t know whom they would vote for.

Still, celebrity surrogates can be a conduit to help candidates connect with audiences in ways candidates themselves might find difficult to replicate or drive an uptick in grassroots donations.

“When you’re talking about a U.S. Senate race that’s pretty sleepy, the injection of some celebrity firepower on the side of one candidate will probably help that candidate,” said David Jackson, a political science professor at Bowling Green State University whose research focuses on the links between young people’s entertainment and political preferences.

Over the course of the primary, Tzintzún Ramirez has strived to reassert herself by running to the left of rival MJ Hegar, who is backed by the Democratic Senatorial Campaign Committee. 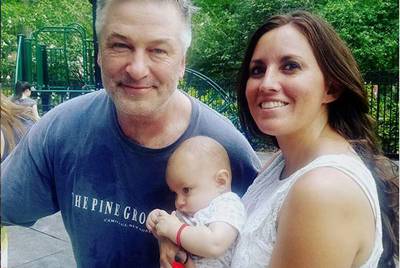 Cristina Tzintzún Ramirez has a young child, Santiago, and wasn’t sure if it was the right time to run for office. Alec Baldwin encouraged her to run for the U.S. Senate.

On a November episode of Baldwin’s podcast, Tzintzún Ramirez criticized Hegar for being “more moderate.”

“What do you have that she doesn’t have?” Baldwin questioned.

“I know how to speak to the diversity of the state,” said Tzintzún Ramirez.

Whether Tzintzún Ramirez can generate support among the more moderate side of the party’s base has been on the biggest question marks surrounding her run.

“I don’t know that she can count on, for instance, turning Republicans into Democratic voters,” said Sherri Greenberg, a professor of practice at the LBJ School of Public Affairs at the University of Texas at Austin. “To win in this state, she’s going to have to bring substantial new voters to the polls … and it’s one thing to register people, it’s another thing to get them out.”

Baldwin’s support could also land Tzintzún Ramirez in a politically delicate position: Her ties to the actor might open her up to criticism from other Democrats — or Cornyn — that she’s the candidate of Hollywood’s elite. Hegar experienced this firsthand last year when Cornyn derided her as “Hollywood Hegar” for her slate of celebrity fans, which included comedian Patton Oswalt, “Hamilton” creator Lin-Manuel Miranda and actress Alyssa Milano.

Although she hasn’t played up their relationship much on the trail, Tzintzún Ramirez is acutely aware of how a celebrity endorsement can hurt her candidacy. After touting it on social media, she quickly disassociated herself from the endorsement of actress Susan Sarandon, who is notorious to many Democrats for refusing to support Hillary Clinton in the 2016 election.

For his part, Baldwin also understands why some candidates might want to distance themselves from the self-described “Trump crap” he’s been doing on SNL.

“I’ve had people say to me, ‘I really admire you … but as a matter of fact, don’t come [campaign],’” he said. “Cristina is not one of those people.”

Tzintzún Ramirez hopes she can be a test case for the post-O’Rourke Texas Democratic Party, which learned that one of its candidates can compete statewide. She’s hoping to ignite a coalition of young Texans, voters of color and progressives and is touting a willingness to upend the party’s establishment in ways it has previously combatted.

“Texas has certainly become more racially diversified, and if you get all those people to the polls, she has a real chance to win,” Baldwin said. “I think she’ll win the primary.”

Baldwin has said he will support the Democratic nominee against Cornyn — he’s even offering to host events for that candidate in Texas, if he or she wants — regardless of who wins.

Due to his hectic schedule, Baldwin says it’s unlikely he’ll be able to visit the state until after the Democratic primary, but he said he plans to help Tzintzún Ramirez however he can in the coming weeks.

Asked about a possible SNL appearance for Tzintzún Ramirez, Baldwin laughed, saying he had no influence on the show’s choice of guests.

“I don’t foresee Cristina Tzintzún on SNL,” he said — then paused.

“Not unless she runs for president.”

Disclosure: The University of Texas and the LBJ School of Public Affairs have been financial supporters of The Texas Tribune, a nonprofit, nonpartisan news organization that is funded in part by donations from members, foundations and corporate sponsors. Financial supporters play no role in the Tribune's journalism. Find a complete list of them here.