Sean Lowe is hopeful that the cast of The Bachelor will look more like America. In an interview with ET's Lauren Zima on Monday, the former Bachelor opened up about Rachel Lindsay's criticism of the franchise, which she called "white washed." As the only black lead in the franchise's 18-year history, Rachel said that the franchise needs to cast a black man as Bachelor -- and Sean agrees.

"I would say I want to see a black Bachelor. But I think you would be doing that person an injustice if you just cast him as the lead for the simple fact that you want a black Bachelor," he expressed, noting how leads are often chosen from the cycle of Bachelor or Bachelorette before, and that he wants to see more diversity in each season's cast.

"What they need to do is start casting more black men in The Bachelorette, because... [the team] picks a good Bachelor based on their merits, based on the fan reaction and so forth, and it won't be that difficult if you just continue casting black men," Sean added. "But unfortunately, season after season, there only seems to be one or two, maybe three [black men] cast in a group of 25."

Sean's 2013 season of The Bachelor was the most diverse of its time. There were no black women cast on the four seasons before his (starring Jason Mesnick, Jake Pavelka, Brad Womack and Ben Flajnik). Sean's season had four black women as well as other women of color. The following season, starring Juan Pablo Galavis, had two black contestants, and the season after, starring Chris Soules, had just one.

Sean told ET that in preparing to be the Bachelor, production "asked me very specifically, 'What type of woman are you into?'"

"Of course, I started out with, 'I just want someone that's kind, that's funny.' They said, 'Well, no -- physically, what are you into?' And I said, 'I really don't have a type.' I told them I dated people of all races... I think that actually got them excited and that's why there was probably more diversity on my season, because they knew I was open to that," he said. "But hopefully that trend continues and they can continue finding leads who are into multiple races."

Sean is also the only Bachelor to actually marry his final pick. His wife, Catherine Lowe, is the third woman of color to get engaged to the Bachelor. She admitted on Instagram on Sunday that she thought she was cast on Sean's season to "check" a diversity box; she credits her success on Sean's season to his dating life pre-Bachelor.

Tomorrow, our season of The Bachelor re-airs in a condensed three hour episode. When I was originally cast, I was very flattered but somewhat grounded by the fact that I would be one of the faces that represented people of color. I knew that one of the reasons I was probably chosen was because I was Filipino. I counted myself out to be his fiancée because of what I assumed Sean liked. I thought I was there just to check a box, but I ended up with so much more. I became present with the process and as he started noticing me for who I really was, I allowed this experience to open myself up to the possibility of being fully loved and appreciated for all that I was. I ended up getting to represent a mixed race community, I found Christ (I LOVE my testimony!) and marrying the most amazing man I’ve ever known. I’d say doing this show was one of the best things that ever happened to me. ❤️ (Don’t count yourself out. You are destined to do bigger things than just check a box.)

"It wasn't like, a revelation that I had," Catherine said of Sunday's Instagram. "I think going into it I knew they have spots to fill, and that's nothing against casting. They do a wonderful job... They cast for the lead and then they cast for the show."

"I was lucky to be one of the people that was chosen. I got to represent the minority group, and I was happy to... I think that they did a really good job in our season to cast for Sean, because he actually has dated and has been attracted to people that are from all different walks of life, all different looks, and I'm glad that I got to represent Filipinos and people of color on a show that usually airs towards a lot of white people," she explained. "I think that it definitely made me think about how I counted myself out as a person of color, because of what I thought Sean would like. I just thought, 'OK, he's a beautiful blond nice boy from Texas. On paper, we couldn't be more different.' So, I kind of already was like, 'He's not gonna pick me, so I'm going to have fun, and I'm gonna have a good experience.'"

In a blog post on Monday, Rachel shared that in addition to casting a black lead, she suggests the Bachelor franchise hire more producers of color. "I think that's fair," Catherine told ET. Rachel would also like to see leads that are truly open to dating other races.

Sean and Catherine's love story was showcased on Monday's premiere of The Bachelor: The Greatest Seasons -- Ever! The couple admits that seven years later, "it feels so weird to think that our family started on a show like The Bachelor."

"We asked ourselves, 'Did we really meet on this cheesy reality TV show about love?' Because it doesn't seem like us. And it's not in our personalities to do that," Sean confessed. "But her best friend signed her up, my sister signed me up, and the rest is history."

The pair married in 2014 and now have three kids together, sons Samuel, 3, and Isaiah, 2, and daughter Mia, 5 months. While they're a bit young to understand what's going on in the world amid the coronavirus pandemic and the Black Lives Matter movement, Sean and Catherine teach their children values of love, acceptance and perspective.

I’ve laid off social media for the last several days. Didn’t have the words and I guess I didn’t want to come across as self-serving by posting something without giving it serious thought. Not to mention, I’m fairly certain most of the world does not care what a former reality TV guy thinks about anything- much less something as heavy as this. But I know I have a voice and I know I need to use that voice for what is right. I still don’t think I can properly articulate everything I’m feeling but I’ll start with this... As a Christ-follower, I see the world and its brokenness through a different lens. Here’s what God’s word teaches us- weep with those who weep (Romans12:15), love one another as I have loved you (John 15:12), love your neighbor as yourself (Mark 12:31) and the Lord is near to the broken-hearted (Psalm 34:18). In other words, we are COMMANDED to love and empathize with our black brothers and sisters who are hurting, who are mad, who feel unheard, who are grieving, who are scared, who feel mistreated. My children will not know how it feels to be black but they will definitely be taught how to love their neighbors (ALL neighbors) and empathize and weep with those who are weeping because our creator who loves us so much also wept with those who were hurting (John 11:35).

"I think when people look at me, they think, 'Oh, here's a blond, white guy and he probably doesn't know about diversity,' and I told Catherine so many stories -- I grew up in a city where I was the minority... so, I just I have a different perspective. The whole racial divide never really hit me until probably after college. Then you start to realize like, 'Oh, other people view things differently and in not such a positive way,'" Sean said.

"We're in a unique situation -- our kids look white, but they have a brown mom. So, it's probably a little easier because that's just how they're growing up," he added. "But we're definitely going to stress to them, 'We're all God's children, and you're not better than anyone, you're not worse than anyone.'"

The Bachelor: The Greatest Seasons -- Ever! airs Mondays at 8 p.m. ET/PT on ABC. See more on Sean and Catherine in the video below, and tune in to Tuesday's ET for more from our interview. 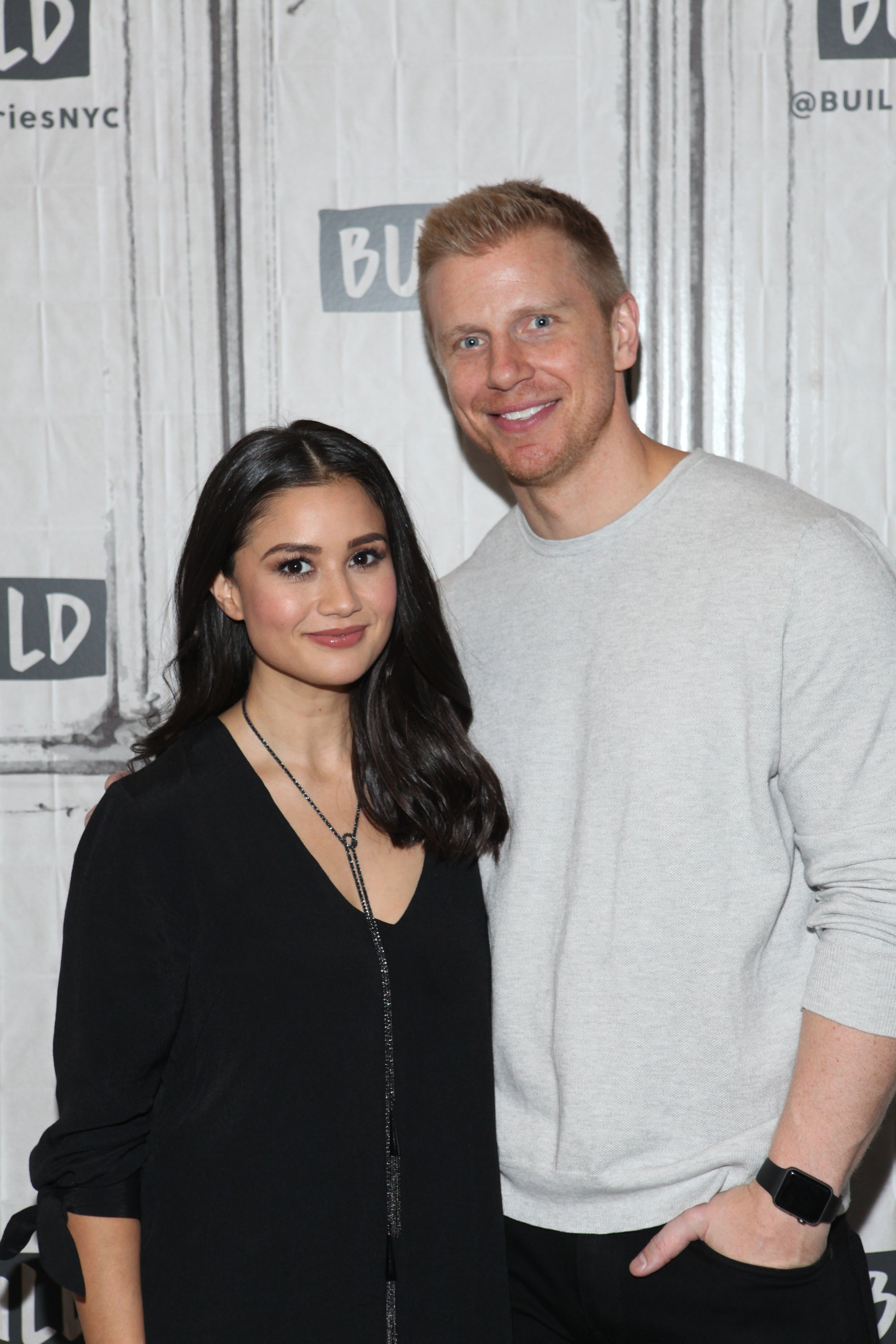