After years of slim pickings Amanda Peet has finally found a role to chew on, portraying betrayed wife and convicted murderer Betty Broderick in the second installment of the Dirty John, USA Network’s anthology true-crime series. “It was very exciting for me to get a part like this at this time,” says Peet, who delivers a career-defining performance. “I’m 48 and so many of the parts that I get are to play someone’s mom or someone’s wife and the part isn’t very interesting and it's not very challenging. So I could see right away that I was going to have to be balls to the wall.”

Since first breaking out with The Whole Nine Yards, Peet has appeared in everything from the thriller Identity to the acclaimed independent rom-com Sleeping With Other People. In recent years, she’s carved out a place for herself on TV with roles on HBO’s Togetherness and IFC’s Brockmire. But when promoting her part as a young grandmother in Matt Weiner’s 2018 Amazon series, The Romanoffs, she lamented about the limited number of roles coming her way. “[There] are certain things that you just have to take a shot on,” she told ET at the time.

A year later, Peet’s determination paid off, when it was announced that she would be starring in Dirty John: The Betty Broderick Story opposite Christian Slater in an unbelievable true story about what Oprah Winfrey called one of “America’s messiest divorces,” which ended with Betty killing her ex-husband, Dan, and his new wife, Linda, while they slept.

“It’s not a simple story,” Peet says. The series, created and written by Alexandra Cunningham, doesn’t excuse Betty for her crimes, but it does show how a mix of mental illness, self sabotage, gas lighting and emotional abuse led to the dissolution of her marriage with Dan and ultimately her tragic downfall. “Betty was not just this cliché of a woman scorned, Dan Broderick was not the sole villain in this tragedy by any stretch of the imagination,” the actress continues. “And I think [Alex] just wanted to really explore how it's possible that this very normal, successful seeming suburban marriage -- American marriage -- could’ve taken such a precipitous fall and become so hellish and so violent. I think this is just a very intimate look at what the factors were that led up to the tragedy to the murder.”

In order to bring this portrait to life on screen, Peet relied on Cunningham’s scripts to get inside the head space of Betty, who goes on a decades-long journey from supportive housewife to matriarch of a growing family worried her husband is cheating on her to an ex-wife unwilling to accept the end of a marriage that she put so much time and effort into. “The beginning of their journey was full of hope and was also very traditional,” she says. “What fascinated me about the story is how such a normal person with a quote-unquote normal suburban life could snap.”

Throughout the series, Betty is filled with many mixed, ever-changing emotions, going from unhinged to angry to tender to upset all in one scene. It’s wild at times, but also very relatable for anyone who has grown suspicious in a relationship. “I'm a very jealous person and I think a lot of the emotions she had are easy to understand,” Peet says, before asking: “It’s just at what point and why does it boil over?”

In order to get to that boiling point, Cunningham shows Betty’s mental and physical deterioration, which is best captured in her ongoing lunches with her few remaining friends (including one played by Missi Pyle), who grow increasingly scared of and worried for Betty. By the end, Cunningham says “people were so tired of her and annoyed by her and embarrassed by her behavior and the fact that she couldn’t stop talking about Dan and she couldn’t stop exercising her rage in public that they didn’t notice what the deterioration might mean.”

In some ways, that deterioration was mimicked on set for Peet, who was excited to film those scenes in the beginning. “But over the course of the show, like, when they saw me towards the end, I was just a raw nerve,” she says. Ultimately, “it was really fun to explore the part of Betty that cared about social status and the part of her that was a ‘lady who lunches,’” she continues, adding that Betty “was able to keep up this facade that was very important to her.”

The status that she strives to hold onto is also seen in the clothing Betty wears, which went from plain Jane when she was first married to Dan, to designer outfits and expensive jewelry as her husband became more successful. And throughout the divorce, that clothing transforms into armor, protecting that facade she has created for herself. “She was armoring herself for a long time. Like, ‘This is my wife. I’m not letting go of it,” Cunningham says. “The clothes and the hair were a big part of that.”

It’s something Peet could relate to on a personal level, after watching her own parents go through a divorce when she was young. “My mom was single for the first time in her adult life and sometimes when I put on those outfits, I was like, ‘Oh my god, I am my mom,’” she says, explaining that her mother and Betty were in very similar situations. “That idea in and of itself, women becoming middle age and then having to be discarded and then finding their own way after having identified as someone's wife and for so long was very poignant to me.”

In this case, Betty poured most of her life into “becoming a wife and mother,” Cunningham says, “and then that identity was taken away from her.”

“For some, that was a recipe for tragedy,” Peet concludes. 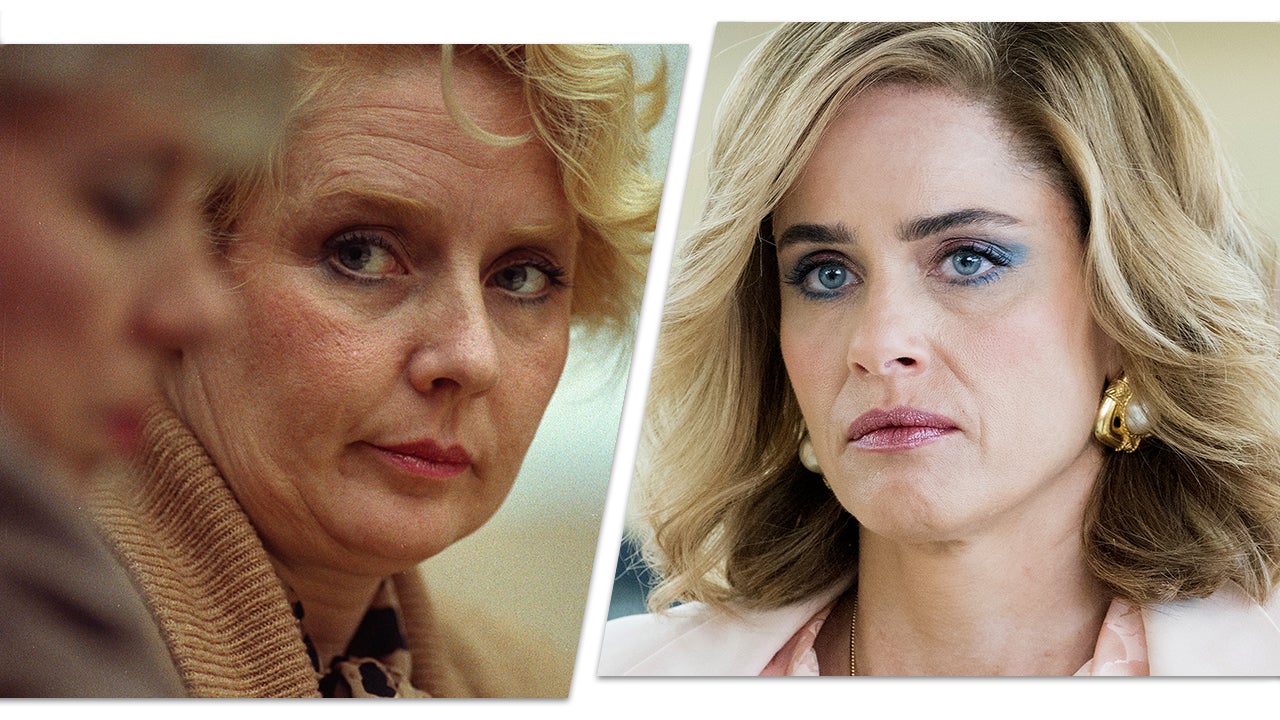