HPD: Man fatally shot while trying to get stolen car back

The 17-year-old, who first charmed America in 2018 when she was crowned the winner of season 15 of The Voice, is back with new music.

"Ever since winning The Voice, everyone was asking, 'When are you going to put music out?'" Shepherd exclusively tells ET. "I kept telling them, 'I'm working on it,' and now that it's finally done and it's finally out, people are actually able to hear who I am as a singer. It feels really, really great."

As for who Shepherd is as a singer? Right now, she has three individual tracks available, "Everybody's Got a Story," "Mama Got the Chair" and "Southern Boy," with much more to come.

"This is a little taste and I have some of the super, super classic sounding, some of the sassy stuff, and the storytelling," the New Mexico native explains. "There’s definitely a lot of different aspects about my voice, who I am as a country singer, that I can’t way to show everyone."

When it comes to the "sassy stuff," Shepherd says she draws inspiration from legendary country artists like Loretta Lynn, Tanya Tucker and Gretchen Wilson.

Happy Birthday to my BIGGEST inspiration in country music! I love you Miss Loretta! Hope you have the best birthday ever!❤️ @lorettalynnofficial #HappyBirthdayLoretta #LorettaLynn

Not to mention, Shepherd's former Voice coach, Kelly Clarkson, who has taken the young artist under her wing.

omg...thank u @nbcthevoice for everything. i can’t believe this! i’m super excited for the next chapter of my journey❤️❤️ i love u all!!

"She’s a really strong part of the empowering women [aspect] because she’s a strong woman that a lot of young girls can come to," Shepherd says of Clarkson, who brought Shepherd as her red carpet date at the Academy of Country Music Awards in 2019.

loved walking the carpet with @kellyclarkson at the @acmawards today!❤️

While Shepherd is focused on furthering her career as a country music artist, she still holds The Voice close to her heart, offering advice to season 18's current contestants who are competing virtually during the ongoing pandemic.

"Just have fun with it and put your own artistic style to each song you sing," Shepherd suggests. "Because you’re not going to be in front of an audience, but you still have to feel it. You still make sure that the people you’re singing to across the screen are feeling it."

Similar to the Voice contests, Shepherd is also adapting to changes amid the coronavirus crisis, which has affected her high school graduation ceremony and prom.

"I’m bummed about not being able to actually walk with the walking partners that I chose, but it’s still going to happen [virtually] and I think that it’s really great how my generation and my school and community is really uplifting one another because I feel like we’re all feeling this in a different way," Shepherd says.

Shepherd was originally going to miss her senior prom due to having a concert scheduled the same evening, but now, she is holding out hope for a rescheduled date later in the year. If that happens, Shepherd plans to bring her dad as her date, since she admits she has "never once" been asked to a dance in her four years of high school.

"I'm a daddy's girl for sure," Shepherd gushes, admitting that her father, Gator Shepherd, is "super protective."

Luckily for Mr. Shepherd, the classic country singer is focused on her career right now over a relationship, but her latest song, "Southern Boy," details what Shepherd ultimately hopes to find one day.

"The cowboys, the Southern ones," Shepherd says. "The ones that are respectful, you know... They'll knock on the door and shake your dad's hand. I will definitely say that's my type."

For more on Chevel Shepherd, check out the video below.

'The Voice' Star Chevel Shepherd Knows What Her First Big Purchase Will Be After Winning $100,000 (Exclusive) 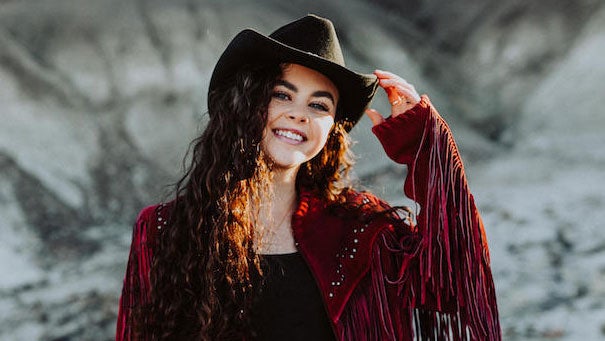